On Monday, the Jimtown Golfers played South Bend Washington at McCormick Creek. It was quite a night. We witness a great round of golf by Jimtown Senior Broc Maurer. He shot a 32 which is a 4 under par round of golf on the back nine. 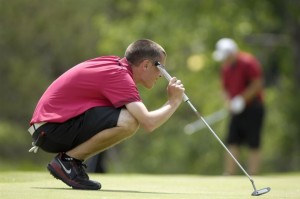 What makes this round of golf so special is that he also missed 2 other birdie putts. He finished the round with 4 birdies and 5 pars. This sets a new school record. After the round he was so pumped, he said he didn’t know if could go to sleep at night or stop thinking about this round of golf. This round of golf just didn’t happen, it came as a result of dedication, endless practice, and many rounds of golf. Another great round of 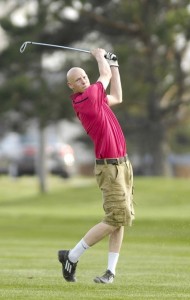 golf was turned in by Tyler “Bubba” Wenger who shot a 41. He finished with 4 pars and 5 bogeys. He just missed several par putts in his quest to break his season’s best score of 40. Finishing the scoring for the Jimmies was Hunter Price and Austin Secor, both had 48s.  These four golfers set a new seasons best of 169, breaking the old mark of 170. South Bend Washington finished with a 197. The win, now gives Jimtown  7 wins and 5 losses. The Varsity next match will be on Wednesday at Eberhart Golf Course against Mishawaka.
South Bend Washington didn’t have a JV team but our JV team turned in a 215 score. Leading the way for the Jimmies was Jeff Payne with his seasons best, a score of 45. Cad Campbell had a 55, Tanner Magyar had a 53, Grant Bour had a 62, Skylar Lay had a 63, and Drew Chastain finished with a 76. The JV team will be in action on Wednesday at Whispering Pines golf course in the NSC JV Tournament. 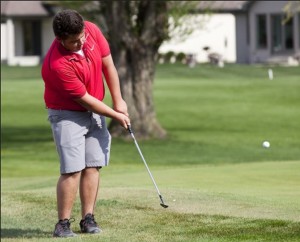