Congratulations to Kenny Kerrn of Jimtown who was crowned the 2015 Al Smith Invitational Champion at 145 pounds!!

The invitational was Tuesday and Wednesday the 29th and 30th of December at Mishawaka High School.  The Al Smith Invitational is a very prestigious wrestling tournament that is hosted every year at Mishawaka during the holiday season.  This tournament draws many of the very best wrestlers from around the State of Indiana—from the Indianapolis area and beyond.  It is a HUGE challenge for any wrestler.  Next to the actual IHSAA State Tournament, there is not a tougher event to win or place in the upper echelon.

In his march to the 2015 championship, Kenny was un-seeded.   This means he had to take the hardest path possible through the toughest competition to make it to the top of the 33 man field.  It was quite obvious that Kenny used this as motivation as he knocked off the top ranked wrestler (Kasper McIntosh) at the Al Smith this year.  This same kid was the 8th place finisher in the entire IHSAA tournament last year and (before this tournament) was undefeated at 11-0!!  Kenny then beat Cameron Beam from Penn by a score of 15-3 in the championship match!!  Cameron made his way to the championship match as the 6th seed.   Here is a look at the final bracket in the 145 weight class: (click the link below)

We are so very proud of Kenny Kerrn and are excited about wrestling action that is yet to come this year!!   This is the sort of “never-say die”, can-do attitude that Jimtown Wrestling has come to be known for.  #HAMMERTIME

Kenny was not the only bright spot for the Jimmies over the last 2 days!!  The team was able to finish a very respectable 11th place in a very talented field.  Many of the schools are much bigger than Jimtown. 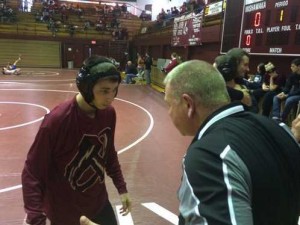 The Jimmies are also able to boast of 6th place finished from 9th grader Matt Gimson and 12th grader Jarod Hayes.  Matt was 6th at 113 pounds.  Jarod was 6th at 195 pounds.   Many of the other Jimtown wrestlers performed well in the early rounds, but just did not end up placing in the top 8.

Jimtown will have little rest now as we prepare to travel to Fort Wayne on Saturday, January 2nd to participate in the IHSWCA Team State Duals.  This invitation only event is held at the Fort Wayne Coliseum with wrestling action beginning at 8:00am.  You can read more about this event from a previous article written on this web page.