It was an historic day for Jimtown Wrestling on the second day of 2016 in Fort Wayne!!   The Jimmies finished as the runner-up team in the state of Indiana for Class 2A.  The exciting day of wrestling highlighted the “tough as nails” attitude of Jimtown wrestling kids and was just another chapter in the epic history of Jimtown Wrestling and our hall-of-fame head coach, Mark Kerrn.

You can click this link to read the story in the South Bend Tribune:

Jimtown was invited this year to participate in the Indiana High School Wrestling Coaches Association (IHSWCA) Team State Duals at the Fort Wayne War Memorial Coliseum.   This State Duals are in it’s 4th year of existence.  This event is invitation only and the matches are divided into 3 classes based on school enrollment.   There were 36 total schools invited to the State Duals this year.  Jimtown was in class 2A—which is the middle class in school size.

Jimtown entered Saturday’s event, un-ranked, un-seeded and un-heralded.  However, ALL of the teams in this event are good.  There are no slouches.  Schools do not get invited to participate if their teams are not good.  If the Jimmies were going to do well, we would have to slay some giants. 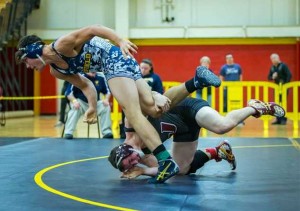 wn opened the day with Lebanon.  Jimtown won that match 36-25.  This advanced the Jimmies in pool play to take on the Leo Lions.  The Leo kids were tough opponents and certainly did their best to try to intimidate the Jimmies.   Our Jimmies were, however NOT going to have it and were up to the challenge.  We did not back down and we certainly were not going to roll over for the ranked Lions.   Jimtown won the pool with a 36-24 victory.

The stage was then set for a showdown with #1 rated and undefeated IHSWCA Team State Duals champions—the Yorktown Tigers.   In the 3 year history of this tournament, Yorktown has not lost and have been crowned champions each year.

Once again, the Jimmies did not back down nor get discouraged when things did not go as well as they had hoped in individual matches.  The Jimmies and the Tigers went back and forth through the matches.  Huge 6 point pins by Kenny Kerrn and Ben Davis kept the Jimmies right in the mix and a 4 point major decision by Dalton Heintzberger set the stage for the final couple of matches.  An overtime nail-biting over-time win from Nick Mammolenti in the heavyweight match provided a 4 point cushion for the Jimmies going into the final match at 106.  Nick battled back and forth with his guy until finally claiming the win on a take down in the 2nd overtime.  Hunter Watts then battled his kid into overtime.  With a 4 point cushion, the only the way the Jimmies could lose the match would be if Hunter lost in a pin to the Yorktown wrestler.  Both battled and battled, but eventually Hunter gave up a take down in overtime.  While that loss was painful, it was only for 3 points and it handed the overall match to the Jimmies. 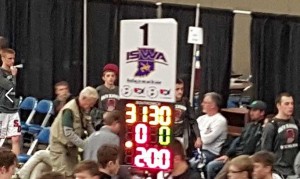 Jimtown ended up finally losing in the championship match to Bellmont by a score of 46-23.  It was obvious that the Jimmies were spent and had really used a lot of energy in the defeat of Yorktown, whereas Bellmont had blown through North Montgomery easily in the semis by a score of 54-12.  Bellmont was more rested and took advantage of the tired Jimmies in many of the early rounds.

Click the following link to see a match by match summary of the semi-final match with Yorktown:

I cannot put into words how proud I am of our Jimmie Wrestlers.  NOT just because they finished 2nd in the state and that they upset some teams that were favored.  I am most proud at the work ethic, the responsibility, leadership, integrity and courage needed to make this happen.  Each wrestler doing their part, knowing their role and doing whatever they needed to do to help their teammates be successful.  Each wrestler, even in the the disappointment of the loss to Bellmont displayed great sportsmanship and leadership among each other and the other teams—even if that was not always given in return.   This is really not surprising coming from Jimtown teams and Jimtown coaches.  Our coaches (such as Coach Kerrn and his staff) intentionally teach the things that go beyond simply winning and losing.