The Jimtown Jimmie wrestlers showed their stuff on Saturday, January 16th in the Northern Indiana Conference wrestling championships at Mishawaka High School. This meet was historic in nature as it represents the first time the newly expanded conference of 13 teams included Jimtown.  Jimtown, Bremen, New Prairie and John Glenn all participated this year for the first time in the NIC…joining the original 9 schools of the NIC.

Jimtown’s fantastic performance today, highlights the “David vs Goliath” matchup of 3000+ student Penn High School vs Jimtown’s 600.  While the Jimmies were not able to overcome the defending state champion Penn Kingsmen, the young Jimmies opened some eyes as we did well vs. the rest of the field including former state wrestling champs, and school host, Mishawaka. 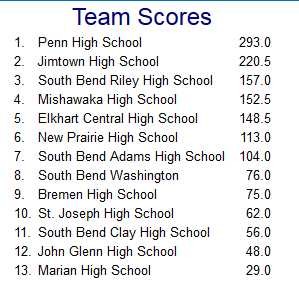 Championship Winning weight classes for the Jimmies were:

Finishing in 2nd in their weight classes were:

Also placing and scoring final round team points for the Jimmies were:

Click this link to pull up a weight class by weight class summary of the NIC Championship today:   Tournament Results

Jimtown will have a dual meet at home vs South Bend St Joe on Thursday the 21st of January and the Bremen Super Dual on Saturday the 23rd.  After that the IHSAA sectional action begins on Saturday, January 30th.  Jimtown goes to the Elkhart Memorial Sectional.