The Jimmies entered Saturday’s IHSAA sectional with high expectations.  The hard word, dedication, blood sweat and tears have paid off for the Jimmies as we were today crowned the IHSAA Elkhart Memorial Sectional Champions for 2016!!

Jimtown ended up getting 10 individual wrestlers through to the regional round, which is next Saturday at Goshen.  However, the sectional championship today was not easy for the Jimmies as Elkhart Memorial staged a late rally to challenge the Jimmies.  Before the championship round, Jimtown had opened up a 20 point lead on the Crimson Chargers, but some losses to Memorial in head to head matches closed the gap as well as some weight classes where Jimtown did not have anyone in the championship or point scoring round.  In fact, with only a few matches remaining, Memorial actually took a three point lead…but a pin by Jarod Hayes in his weight class as he went for 3rd place, and close decision by Ben Davis in the same situation, netted some much needed points for Jimtown.  Caleb Fowler then beat his kid at 220 pounds for 5th place. 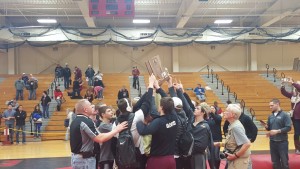 All of these matches were huge for the Jimmies.  Despite the fact that all of these wrestles were disappointed that they did not place higher, they did not give up—scoring much needed points for Jimtown and setting the stage for the end.

Jimtown had second place finishes from:

Jimtown had 3rd place finishes from:

Jimtown had 4th place finishes from:

We had 5th place finishes from:

and 6th place finishes from:

Cole Watson at 138.  Note:  Cole had to withdraw after the semi-final round as he dislocated his elbow.  Cole is OK, but unfortunately, his season is over.

You  can view the final results by clicking this link which will take you to TrackWrestling: