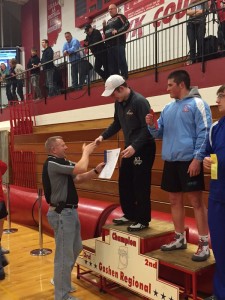 Coming off last week’s IHSAA sectional championship, Jimtown had 10 wrestlers that qualified to participate in Saturday’s Regional Championship at Goshen.  While wrestlers need to be in the top  4 in each weight class to advance, the team scoring is different than sectional.  In the sectional, teams get points for each place from 6th place to 1st, but at the regional level, team points are only awarded for the top 4.  Last week, the Jimmies were able to win the sectional with our depth…at the regional level, only higher placers would score the team points needed to win the team title.

The GREAT news for Jimtown on Saturday at Goshen was that out 10 wrestlers that we brought, 9 of them finished in the top 4 and were able to advance to next Saturday’s semi-state in Fort Wayne.  3 of these 9 wrestlers were regional champions:

The Jimmies also had 2 runner up finishers:

and Hunter Whitman at 113

Receiving 3rd place finishes for the Jimmies were:

And finally our 4th place finishers were:

Jimtown battled tooth and nail all day with Elkhart Memorial and Prairie Heights on team points.  With the more restricted scoring at the regional level and the insertion of  powerful Prairie Heights into the scoring mix, Jimtown was not able to use our depth to pull away in team points like we did last week in the sectional   The tournament was nonetheless, very exciting and we could not be prouder of our kids.

Kenny Kerrn once again faced a championship match challenge from the 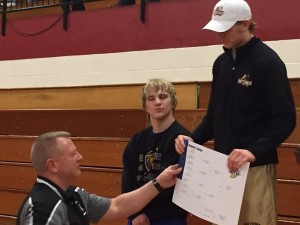 same tough opponent that he faced last week in the sectional.  Jamal Scott of Elkhart Central fought Kenny tough as he always does, but Kenny was able to end up posting the 5–0 decision in the end.

Jarod Hayes’ match  at 195 and Nick Mammolenti’s match at 285 were nail-biters right from the get-go.  Jarod trailed most of the match and desperately tried to score points on Lakeland’s Austin Evans who was obviously trying to just stall, wind out the clock and win the match.  Jarod made an impressive move in the last seconds of regulation, and got the takedown to tie the match right at the buzzer.  In overtime, Jarod would not be denied–made the quick shot to the leg, lifted, got the takedown and the championship.  It was a very exciting match and another example of how Jimtown  wrestlers are taught NEVER to quit.

In Nick Mammolenti’s match at heavyweight, Nick faced Braxton Amos from Prairie Heights, whom Nick has lost to three times by a total of 3 points.  The Amos kid is quite tall and with the added leverage,  Nick would have to wrestle perfectly to win.  Nick got inside on a headlock with a quick move with only seconds to go in the first period.  Once he got the head, he was not going to let go.  A quick push back and a little tripping motion by Nick and Amos went right down like a sequoia tree felled by Paul Bunyon.  He went right to his back with Nick clamped on his head like a vise.  Nick squeezed it out and BOOM…a pin.   Goshen’s gym went wild and the win propelled the Jimmies past Prairie Heights in the team total for 2nd place.

Even though the Jimmies could not secure the team title…we are so very proud of the hard work and dedication of our kids.  Not just the ones that won or advanced.  ALL of our kids, including the ones that practice day in and day out to make everyone better, are to be commended.

Click here to see a print out summary of all of the weight classes: