Jimtown sent 9 wrestlers to last Saturday’s Semi-State in Fort Wayne.  4 of those wrestlers were able to qualify for the state finals at Banker Life Fieldhouse in Indianapolis on Friday and Saturday, February 19th and 20th.  To make it out of the semi-state and continue to 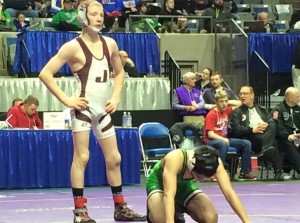 advance in the tournament, a wrestler must finish in the top 4 in his weight class.  At the semi-state level that means you must win at least your first two matches.  After a wrestler does that they know they will be in the top 4 and then the only question remains as to what place in the top 4.

Unfortunately, several of the the young Jimmies ran up against a buzz saw right in the openi 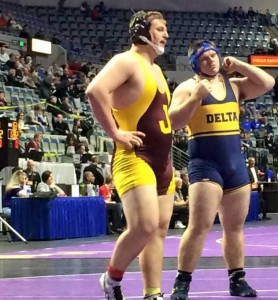 ng matches and were done for the year after getting beat in the opening round.   These guys certainly nothing to be ashamed of: it is a great honor and accomplishment to even be wrestling in the semi-state.

Eliminated in the opening round or second round were Connor and Matt Gimson, Greden Kelly and Dalton Heintzberger and Jarod Hayes.   With the exception of seniors, Greden Kelly, and Jarod Hayes    all of those wrestlers will be back next year and will only get better and better.

Advancing into the semi-finals and thus securing a spot in the state finals were:

All 4 of these Jimmies will now wrestler on Friday night the 19th on the big stage at Bankers Life Fieldhouse in Indy.  In order to finish on the podium and receive a medal for placing in the top 8 in the state they MUST win on Friday night.  Winning the match on Friday, secures a spot in the bracket on Saturday and a chance to keep 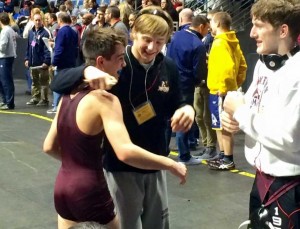 It is an exciting time of the year for Jimtown Wrestling!  Wrestling begins at 6pm on Friday night…but if you are going to watch, you will not want to miss the “Parade of Champions” which begins at 5:30pm.  Each team represented will be introduced as they parade into the arena under the big lights.  It is such an honor to have made it this far.   Tickets to the state finals in Indy are $8.00 per session (there are 3 total sessions—1 on Friday night), or $20 for all 3 sessions.

You can view the state final brackets (to see the path our kids will have to take) by clicking here: