Jimtown wrestling finished the wrestling season off on Saturday night the 20th of February by having 3 of our wrestlers on the medal podium at the end of the night.  While not being able to win in the 2nd round on Saturday dampened hopes of a 1st place match under the lights, winning on Friday and then subsequent victories in the wrestle-back and consolation rounds, ensured the Jimmies spot on the big stage.

Ask anyone who has wrestled at any level and they will tell you this…While not being the champ is a disappointment, just being there, being on the podium and named as one of the top 8 wrestlers in the State of Indiana in your weight division is a HUGE honor and accomplishment.   The good 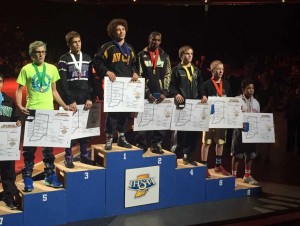 news for our Jimmie wrestlers is that NONE of the 4 that went to Indy this weekend are seniors.  While they are proud to be in the top 8 in the state, they will work harder than ever to move higher on that podium for next year.  The dream of being in that highest most spot on the podium is still alive.

In the meantime…all Jimtown High School supporters everywhere can be so very proud of our kids and their efforts.  While Hunter Whitman was beaten on Friday night in the 113 pound weight class, nobody can deny that the 10th grader will have 2 more years to keep getting better.  He had a great year and his potential will take him deep if he chooses to keep working hard.

The same can be said for 9th grader Hunter Watts who ended up finishing 6th in Indiana in the 106 pound weight class.  Constant improvement and a competitive drive will take Hunter farther next year.

Junior Kenny Kerrn had an epic season as the Al Smith Champion, NIC Champion, Sectional Champion Regional Champion, and Semi-State runner-up.   Kenny can now boast that he was 7th in the State of Indiana in the 145 pound w 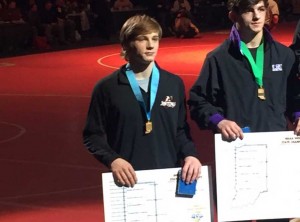 eight class.  He ran up against some determined competition on Saturday and would be the first to admit that he did not wrestle his best in those matches.  Kenny is a competitor.  We are so very proud of him in Jimmie Land, but of this I am certain:  Kenny will continue to work hard to do better next year.   That is what champions like Kenny Kerrn do.

The same can be said for Nick Mammolenti.  Nick is also an 11th grader.  He also had an excellent year, finishing high in several big tournaments and emerging as sectional champion and 3rd at 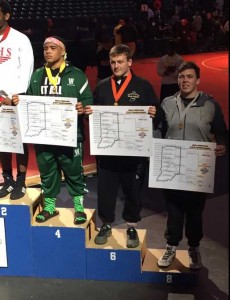 Regional at heavyweight.  Nick had to wrestle many guys this year that out-weighed him by many pounds.  Nick faced two overtime matches on Indy on Friday night in the first round and Saturday in the quarterfinals.  Nick had to grind out the win in overtime on Friday, just to be able to stay alive on Saturday.   He ground out a grueling 7-4 decision in the wreslte-back round and ended up finishing 6th in the State of Indiana at 285.  Once again, like the others, Nick will have another year to come back, work hard and show what he can do.

Great Season Jimtown Wrestlers!!   Thanks for all of your hard work, dedication.  The entire Jimtown Community is proud of you.