There are very few kids at Jimtown High School who will not answer you in 2 seconds if you ask them who “KP” is.  KP is Kaylee Pletcher.  She has been known by KP at Jimtown before she was even in high school. 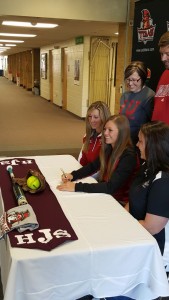 play softball at Indiana University at South Bend.  IUSB will be fielding their first ever softball team as they expand their athletic offerings.  The IUSB Titans are an NAIA school and are members of the Chicagoland Athletic Conference.

As a Jimtown softball player, KP is a part of this year’s currently 16-3 softball team.  She has consistently been one of the best hitters on the team and has occasionally come in to pitch this year in some games.  KP plays outfield and is known for her speed and rangy ability to track down most balls hit in her direction.

The current season is far from over for KP and her Jimtown teammates as our softball team will enter sectional play on Monday, May 23rd.  Jimtown will play SB Washington in the 2nd game of sectional #19 at Newton Park in Lakeville.

We wish her the best of luck in the future.  GO TITANS!!