Jimtown entered this year’s IHSWCA Team State Duals as the state runner-up in class 2A.  Excitement was high and wrestlers where 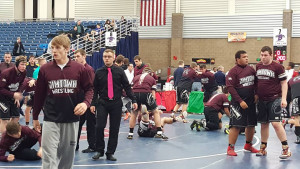 primed for a shot at the top this year.   Just getting invited to this tournament, is in and of itself an honor and a sign of respect.  If you can manage to finish in a high place, that is just icing on the cake.

This year, the Jimmies certainly saw that ALL of the teams that get invited to the team state dual meet are good.   All of them deserve to be there and none of them will go down without a fight.  Jimtown ended up with a very respectable 6th place finish this year.

The Jimmies finished 2-2 on the day; thumping Delta in the opening round by a score of 52-18…(full results below) That win propelled Jimtown into a show down in the 2nd round with Evansville Memorial.   Memorial upended the JImmies in a close match by a score of 42-31.  Jimtown just could not get over the hump against Evansville.  The boys fought very hard in typical Jimtown fashion, however Memorial was not good matchup.   The Jimmies fought back in the consolation round, handing Garrett a 47-26 defeat.  In the final match o 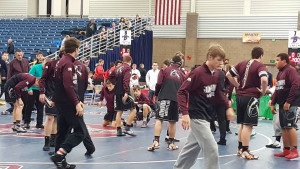 f the day (wrestling for 5th), the exhausted Jimmies fell to Edgewood by a final score of 48-29.

As usual, the Jimtown kids gave it their all and represented their community and school with pride and toughness.  Some of the individual wrestlers had outstanding matches for the Jimmies.  4 wrestlers for Jimtown finished undefeated for the day   In addition to the 4 listed below, Jimtown’s Hunter Whitman went 3-1 for the day and only lost at the very last match in a heart-breaker.

Thanks very much to those Jimtown parents and other supporters that were able to make the drive to Fort Wayne to support the Jimtown kids.  We recognize that this tournament falls two days from Christmas and many of us have family commitments and other things that compete for our time.  We know that many of you were there in spirit and are undaunted in your support  of our student-athletes and their accomplishments.

Jimtown will next compete in the prestigious Al Smith Invitational that is held at Mishawaka High School on Thursday, December 29th. 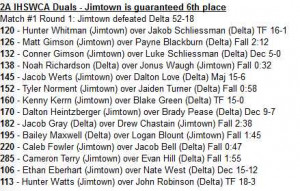 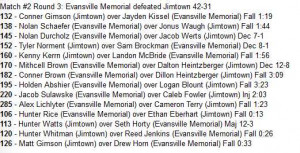 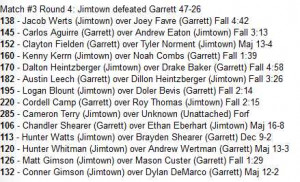 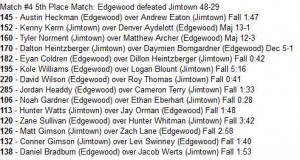