The Al Smith wrestling tourney is hosted every year by Mishawaka High School as they have done since the 70’s.  The tournament is named after now-retired, hall-of-fame Mishawaka Wrestling Coach Al Smith and is held every year over the Christmas break.  This tournament is widely considered one of the toughest, most prestigious      mid-season wrestling tournaments in the State of Indiana.  32 teams from all over the state of Indiana…north, south, east and west…make the trip to MIshawaka to test themselves against the measuring stick of the best wrestlers in the state.   Many consider it a preview of the IHSAA state tournament that will come at the end of January.

This year, Jimtown advanced 3 wrestlers to the final championship match and ended up coming away with 2 weight division champions and a runner-up, (brackets at the bottom of this page).

Sophomore, Hunter Watts won the 113 pound championship in a thrilling match over Kory Cavanaugh of Penn.  Kory was the number 1 seed in the 113 pound division while Hunter was ranked 2nd.  The match went back and forth with neither wrestler able to pull away from the other.  Hunter trailed by a point with only seconds remaining, but was able to secure a 2 point takedown with only a few seconds remaining.  He held on a furious escape attempt by the Kingsman, but the time ran out and Hunter Watts is the champ!! 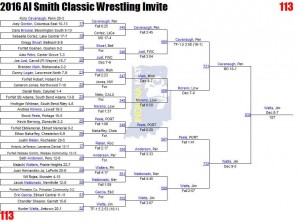 Fellow sophomore, Connor Gimson also made it to the 132 pound championship round unscathed as the 5th seeded wrestler but then faced the number 2 seed in Columbus East’s Dawson Combest.  Just like in the previous Jimtown match, it was a nip and tuck affair with the Columbus 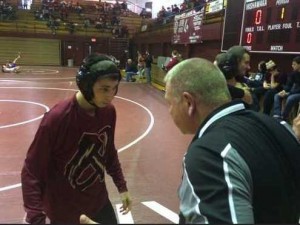 wrestler having the upper hand most of the periods.  Connor hung around—refusing to go away quietly.  With seconds left in the 3rd period, Gimson got an escape and then a takedown to get the lead.  Just like Hunter, he then hung on for a few more seconds as the clock ran out and Connor is the 132 pound champ!! 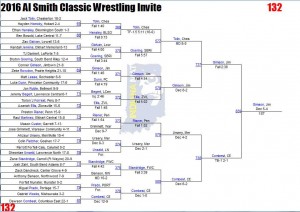 The Jimmies’ prolific three-sport athlete, Kenny Kerrn was the 3rd and final Jimmie to go for the win.  Kenny also advanced to the championship match at 152 as the number one seed.  He was the champion in last year’s Al Smith Tourney at 145 pounds.  This year, Kenny jumped a weight class.  Lurking in the other half of the bracket this year was the 2nd seeded Kyle Hatch of Warsaw.  Kenny and the Jimmies knew that this would not be easy—as all wrestlers at 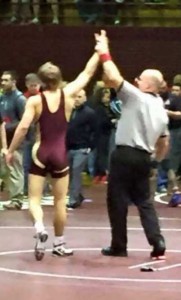 this level are excellent.  This match, like the other two was close all the way as both undefeated and state-ranked athletes refused to back down or make a mistake.  Hatch played defense most the match as Kerrn could not get going with any combinations of moves to get quick scoring opportunities.  In the end, Hatch’s strategy paid off.  The time ran out on Kenny as Wasaw came away with the 6-4 decision. 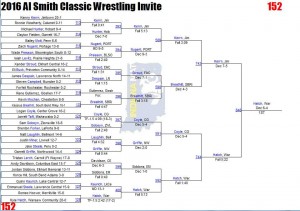 Jimtown had another wrestler who finished on the medal stand as Matt Gimson (twin-brother to Connor) pinned his opponent to finish 5th place in the very tough 126 pound weight class.

The final team score reflected the hard work of our 3 finalists as well as all of the other weight classes as Jimtown finished tied for 7th.  Other than Prairie Heights who tied the Jimmies….all the other schools are much bigger.

CONGRATULATIONS TO HUNTER….CONNOR…KENNY + ALL OF THE JIMTOWN WRESTLERS AND COACHES!!  Keep up the momentum.

You make all of Baugo PROUD!!

Jimtown will be back in action next Saturday at the West Noble Invitational.  Weigh in at West Noble is set for 8am and wrestling action is set to go for approximately 9:00am.