The Jimmies sent 4 wrestlers to the Allen County War Memorial Coliseum in Fort Wayne on Saturday with high hopes.  The hopes became reality on Saturday as 3 of those wrestlers came home as IHSAA semi-state champions and 1 as runner-up.  . The compilation of scores for these 4 wrestlers added up to enough points for Jimtown to finish in 2nd place in the whole meet!!

The single-elimination format of the semi-state meet requires each wrestler to win at least the first 2 matches to make it in the top 4 (moving on to the state meet), A wrestler then has to win the semi-finals and then the championship match to be crowned as the champ.  Completing the 4 match sweep for the Jimmies were:

Hunter Watts at 113 pounds.   Hunter won his four matches with 2 pins a major decision (point spread greater than 10) and a 4-0 decision in the championship match.  Hunter’s workman like precision, speed  and technical wrestling were on display during the championship match as he controlled the action from start to finish.  The 44-3 wrestler from Central Noble gave it his best shot but could not get on track versus Hunter.  Hunter will have a chance to improve on his 6th place finish at state last year as he travels to the state finals for his 2nd time in a row as a sophomore. Click link below to watch Hunter’s intro: 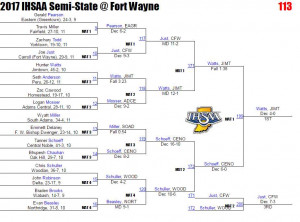 Matt Gimson at 126 pounds.   Matt won his four matches with 3 pins in a row and then an 8-2 decision in the championship match.  This marks the first semi-state championship for the sophomore and his first trip to the state finals.  Matt took apart the 45-2 challenger from Western High School in the championship match with superior speed, conditioning and strength.  Matt was able to counter the moves of the very talented challenger and get back points as he continually exposed his back to the mat.  Click below to watch Matt’s intro: 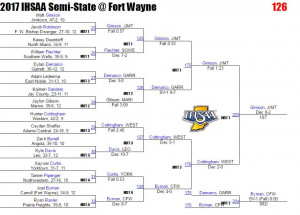 Kenny Kerrn at 152 pounds.   Kenny won his four matches with a pin to start, two decisions in a row and then a dramatic pin in the championship match to seal it up.  Kenny has been battling the flu all week last week.  He had lost a lot of energy and strength with a 104 degree fever all the way up until the middle of last week.  To come out, battle through it and win the championship when he was clearly not at his top form was inspiring to say the least!!  Kenny was behind in the championship match having given up some back points to challenger from Columbia City who was 40-2 coming into the last match. Kenny jumped on a mistake by the challenger and got the pin.  Click link below to watch Kenny’s intro: 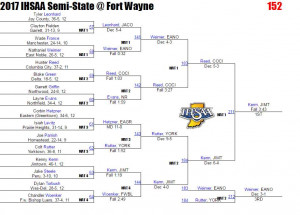 Connor Gimson finished 2 place at 132 pounds in a heartbreaking last second loss in the championship match.  The final score was 3-1 as the official gave a 2 point takedown to the challenger with 7 seconds left.  The controversial call ended up being the difference in the match but it most certainly could have gone either way.  Connor had a major decision a regular decision and a pin in the 3 matches prior.  The good news is that Connor will have an opportunity to get some revenge on the floor in Indy next weekend.  Click link below to watch Connor’s intro: 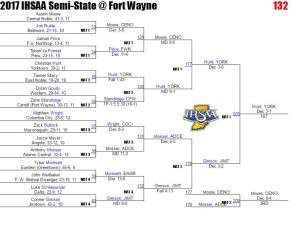 All 4 wrestlers will now head to Indy next Friday and Saturday to wrestle in the 2017 IHSAA State Championship meet at Bankers Life Fieldhouse.  Action gets underway on Friday night with the elimination round.  To get on the medal stand in any place on Saturday, the wrestlers must win on Friday night.  Lose and it’s all over.   The good news for the Jimmie wrestlers is that the high places on Saturday at Semi-state ensure that they will get a good draw for the elimination matches on Friday night.  Coach Kerrn has been here many times before, and he will not allow our guys to fall into the trap of complacency. EVERYONE that makes it to Indy at this time of year is good…and is capable of beating anyone else at any time.

Any Jimtown fans that would like to travel to Bankers Life Fieldhouse this coming weekend to support our kids should be aware that wrestling begins on Friday night at 6:00pm.  The IHSAA also has the annual tradition of the “Parade of Champions”  which will begin at approximately 5:00pm.   The Parade of Champions is an introduction by school of the wrestlers that have made it to the state finals.  They are introduced as they come into the stadium and they parade around the mat until it is time for the national anthem.  It is a very cool tradition and a great honor for the kids who have made it this far.

You can buy advanced tickets for all sessions of the state finals by visiting the IHSAA ticket store.   Click the link below to purchase your tickets:

Here is a copy of the brackets that have just been released today for the state finals coming up.   You can scroll down to the weight classes of our kids:  113, 126, 132 and 152 to see where they fall and who they would have to beat to advance in the tourney.   Click the link below: