The Elkhart Kiwanis Club held their “Student Athlete of the Season” program on Tuesday, February 14, 2017 at the Matterhorn Conference Center in Elkhart.  Chosen to represent Jimtown were  Kenny Kerrn from Wrestling and Sam Pawlak from Boys Basketball.  Near the end of each sports season, the Elkhart Kiwanis Club holds this luncheon for each of the Elkhart Area schools to showcase outstanding students from their athletic programs who symbolize the best that the school has to offer.

Kenny Kerrn and Sam Pawlak were selected as scholar athletes in boys basketball and wrestling  Both Kenny and Sam are 3 sport athletes at Jimtown.  Kenny is active in wrestling, football and track.  Sam is active in , basketball, football and track.    Kenny and Sam are both on track to graduate with Indiana Academic Honors Diplomas and both sport GPA’s that rank them high among their teammates and classmates.  Both Kenny and Sam have been active in their school and community with church, school groups, clubs, student government and community service activities.

Kenny was recently crowned as the IHSAA Fort Wayne Semi-State Wrestling champ.  He will be competing this weekend (February 17-18) at Bankers Life Fieldhouse in Indy at the wrestling state championships. 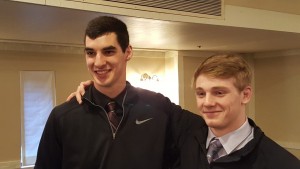 Last year Kenny finished 7th in his weight class and hopes to improve on that mark this weekend.  Kenny is also an all-NIC football player for the Jimmies and an all-NIC hurdler on our track team.  Kenny, some of our other wrestlers and his father (our head wrestling coach–Mark Kerrn) were recently interviewed on WSBT about the upcoming state finals.   You can view that clip by clicking the link below:

Sam has been a starter on our basketball team for the past 3 seasons as well as the starting QB on our football team.  He is also a standout high jumper on our track team.  Last year, he broke a 47 year old high jump record in track by clearing 6’5″.

Kenny and Sam both represent the BEST of what EDUCATION-BASED athletics is all about.  These kids represent what can be accomplished when education and performance in the classroom is placed first…but performance on the field or in the gym is also valued for the lessons that are taught in these “classrooms”.  The values that we preach—Leadership—Integrity–Responsibility and Respect are on full display with these Jimmies.