An outstanding 2016-2017 Jimtown Wrestling season came to an end on Saturday night (February 18th) at Banker’s Life Fieldhouse in Indianapolis.  It ended with 4 Jimmies making the trip to 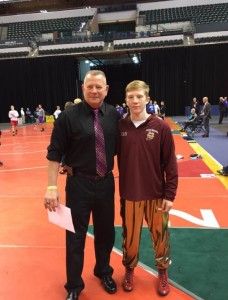 the state finals and 2 completing the journey with a large step up onto the podium to receive a medal.   The step up to the podium happened under the spotlight in front of an IHSAA record crowd of over 33,000 fans. 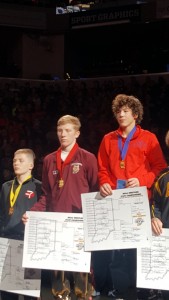 Hunter Watts got 2nd place in the 113 pound weight class.  This outstanding accomplishment happened through the hard work, dedication and toughness that Hunter has displayed all of his wrestling career.  The exciting thing for Hunter is that he was the 2nd best wrestler in the state at 113 pounds and he is only a 10th grader.  Coaches and others that are around Hunter know that he is incredibly competitive.  Even though he is disappointed that he did not come home as the champion, all of Jimtown can be nothing but proud of this kid!!

Click this link to view a floor level video of Hunter Watt’s spotlight introduction before the championship round:

Hunter fought his way back in the semi-final round from being down by a point with only 17 seconds remaining.  Hunter got a quick reversal to take the lead and then some near-fall back points in lightning fashion as time expired to send him to the championship match under the lights.  In the championship match, Hunter fought like the champ that he is, going back and forth with the young man from Indianapolis Roncalli.  The match could have gone either way 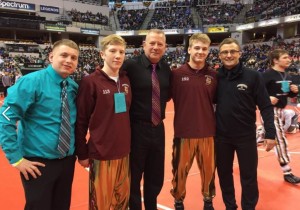 with just a few seconds remaining, but eventually Hunter just ran out of time as he could not escape from the bottom.   It was an epic match under the lights of the fieldhouse and one that I am certain Hunter learned a lot from.

Kenny Kerrn also ended up on the medal stand for Jimtown this past week in Indy.  A 4th in the state finish for senior Kenny Kerrn, tops off a stellar career of wrestling under the tutelage of his father Mark Kerrn. 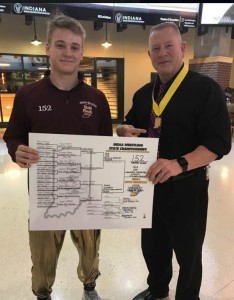 The emotional finish for Kenny and his father underscores some incredible, dominating wrestling that Kenny has done this year in the ultra-tough 152 pound weight class.  Kenny ended up losing in the semi-finals on Saturday to the eventual state runner-up in the 152 pound weight class.   Once again…knowing Kenny and the competitive drive that he shows in all his athletic endeavors, he would have loved to have been the state champ.  There is, however, no denying the awesome performance that this young man has worked so hard for.  The culmination of the nasty grind that wrestling seasons often embody–a 4th place finish in the state is NOTHING but an elite accomplishment that many athletes can only dream of.   NOTHING to be disappointed about!! 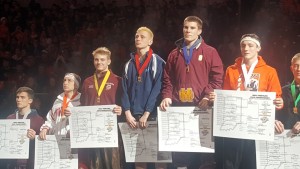 We also want to offer congratulations to Matt and Connor Gimson.  Both young men also made the incredible accomplishment of making down to the state finals in Indy.  Matt was the semi-state champion at 126 pound and Connor was the semi-state runner up at 132 pounds.  Both of the Gimson boys had incredibly tough draws in the state champinship tournament and got beat on Friday night’s opening round.  Both of the guys that beat them had incredible overall records and ended up placing very high in the state meet.

Once again…congratulations to Matt and Connor Gimson for an awesome season.  As 10th graders, you can bet that this will not be the last trip to Indy state finals wrestling for either of these guys!!