Once again, Jimtown High School was honored to host a signing ceremony in the lobby to celebrate another Jimmie heading off to college as a student/athlete.  Dakotah Pratt signed his National Letter of Intent to continue his academic and athletic career while a student next year at Manchester University.

As a senior speedster on the Jimmies football squad, Dakotah ran several kicks (punts and kickoffs) back the other way for touchdowns against Jimtown opponents.  This included a dramatic kickoff return in a wild sectional championship game at Garrett.  Garrett had just scored to take the lead and had an opportunity to kick off from mid-field due to a penalty.  They failed to kick the ball into the end-zone for the touchback—instead trying to pin the Jimmies deep and take advantage of field position.  The one thing they did not count on was the blazing speed of Dakotah Pratt who burst straight up the field and then sprinted past the shocked cover guys all the way to the end zone.   It was a great moment in what would eventually be a Jimtown loss…but one that Jimtown football fans will not forget.  Dakotah has also been a participant in track and baseball in his 4 years at Jimtown. 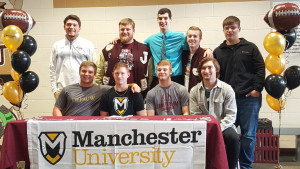 Dakotah will take his academic and football skills to Manchester University in the fall.  Manchester is an NCAA Division 3 school that is located in Manchester, Indiana.  The Spartans are a member of the Heartland Collegiate Athletic Conference in all sports.

Dakotah Pratt is also a very talented artist.  He has been a student for the past two years for a portion of each school day at the Elkhart Area Career Center.  As a student in Graphic Design, Dakotah has won several awards for his work—including the winning design for a “Jessie’s Warriors” t-shirt.   This T-shirt was sold to raise money for injured veterans and was named in honor of Jessie Williams a local soldier who was killed in the line of duty, fighting for our freedom in Afghanistan.  Dakotah will continue to study Graphic Design at Manchester University. 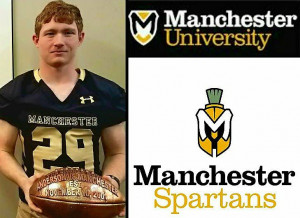 DAKOTAH PRATT!!   We appreciate all of your hard work, dedication and excellent representation of your family, your school and the Baugo Community.   We could not be more proud!!   Good luck at Manchester!!