The Jimtown Jimmie wrestling team elevated to the auditorium stage to take on Elkhart Central in their 2nd annual “Rage on the Stage”. It was an electric atmosphere with a fantastic crowd in a battle of conference opponents. The festivities started with celebrating our senior wrestlers 126 Hunter Whitman, 170 Bryce Track, 182 Daerin Pontius and Managers Camber Allen, Yareli Toledo, and Gigi Ladiera. Jimtown High School and the wrestling team appreciate all of the efforts of these individu 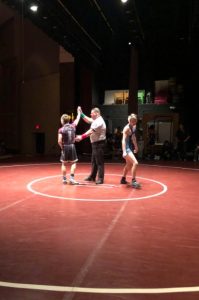 als throughout their careers as a Jimmie.

There were 7 Junior Varsity matches that took place before the start of the big dual. 6 Jimmies would prove to be too much for the Blazers 120 Andrew Cortez, 145 Lukas Medford, 170 Tim Hunter, 285 Hunter Hoffman, 152 Andrew Schmidt all won by fall, and Yvens Reisacher won by decision 7-1. Following the JV matches was the Varsity introductions by former Jimmie Caleb Spires who also gave the play by play.

The dual started at 113 pounds and featured freshman Tyler Dorrier taking on Eric Garcia of Elkhart Central. Dorrier battled tough in the early rounds but would eventually lose by fall to give the Blazers a 6-0 lead. 120 pounds would feature #1 State Ranked Hunter Watts of Jimtown against Brad Fielder of Elkhart Central, Watts scored 5 takedowns and a set of nearfall to jump out to a 13-3 lead before picking up a fall in the 2nd period to tie the dual at 6-6. 126 Senior Captain Hunter Whitman would keep things rolling for the Jimmies as he took on Jacob Hess of Elkhart Central, Whitman scored 12 points in the first three minutes before picking up a fall to push the Jimtown lead 12-6. #8 State Ranked Junior Matt Gimson needed just 22 seconds to pick up and fall over Tony Lopez and push the Jimmie lead to 18-6. Twin brother Conner Gimson ranked #10 at 138lbs scored 14 points to pick up a major decision and four points for the team over Raul Martinez of Central extending the Jimtown lead to 22-6.

145lb Sophomore Jacob Werts had and NIC conference rematch with Austin Garcia of Central, Werts would surrender the first take down before battling his way back in an exciting match to pick up a takedown with 15 seconds left and the win by decision 9-8. 152lb Sophomore Andrew Eaton took on Nate Dibley of Elkhart Central, after the first period Eaton lead 5-0 and would pick up 5 more points in the 3rd to cruise to a 10-5 win and the score would sit at 28-6. 160lb Freshman Cole Thompson squared off with returning state place winner Zander Stroud of Central and the Senior would  pick up Centrals second win of the night by fall in the first period.

170lb Junior Tyler Norment got the crowd excited with a big throw in the first period and would eventually pin Carlos Fortoso by fall to make the team score 34-12. 182lb Senior Bryce Track came out firing scoring seven first period points and the fall putting the Jimmies up 40-12. 195 Daerin Pontius battled a very tough opponent in Alex Lucius of Central picking up a late first period escape to make the score 2-1, Lucius would pick up the fall bringing the dual score closer at 40-18. At 220lbs Roy Thomas of Jimtown would score a first period fall to defeat Omar Perez and put the dual out of reach for the Blazers 46-18. 285 Keenan Perkins battled a very tough Nick Conner from Central before losing by fall in the second period. 106 Hunter Funderburk would win the final match of the night by forfeit to finish the dual off 52-24 in favor of the Jimmies.