Jimtown High school qualified 4 wrestlers for the IHSAA Fort Wayne semi-state this weekend, 3 of those individuals reached the finals and punched their tickets to the state tournament this Friday at Bankers life fieldhouse. 120 Hunter Watts picked up 2 tech falls to advance to the finals and secure his spot at state. 126 Hunter Whitman would lose a tough one first round, capping off a great senior year finishing 39-7. 132 Matt Gimson would pick up two falls in the opening rounds to reach the semi finals and his 2nd berth to the state tournament. 138 Conner Gimson started the day with a first period fall. In the second round 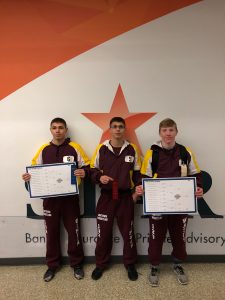 Conner faced #1 state ranked Colt Rutter of Yorktown with a trip to the state finals on the line, this match lived up to the hype, tied 1-1 after regulation Conner scored a takedown midway through overtime to take the victory 3-1.

Semi finals action started with Hunter Watts earning a 15-4 Major Decision to move onto the finals, twins Matt and Conner Gimson would both be winners by fall sending all our remaining Jimmies to the finals. In the finals Watts faced Ian Heath of Leo High School, Watts would score and handful of takedowns and nearfall to pick up the 12-5 win. Matt Gimson took on senior Alex Barr of Yorktown in a hard fought battle the senior would earn the victory 4-0 and Matt finished as the semi state runner up. 138 Conner Gimson would take on a familiar rival Bryton Goering of Elkhart Memorial in the finals for their 4th matchup of the season. Conner would take his third straight win over Goering 5-2 to capture his first semi-state title.

With two champions and a runner up the Jimmies would finish in 2nd place as a team tied with Central Noble and one spot behind Champion Yorktown. Watts will make his 3rd trip to the state finals, and Matt and Conner Gimson will make their second. Wrestling begins Friday night at Bankers life fieldhouse in Indianapolis and end with finals on Saturday night.