The IHSAA held the draw yesterday in Indy for the 2019 Football Tournament Series.

Jimtown will host Garrett High School on Friday, October 25th here at Sharpe Stadium in the opening round of the IHSAA Football Tournament Series.

Start time will officially be announced later this week, but most likely we will have a 7:30pm start time due to the distance that Garrett will have to travel to play here. 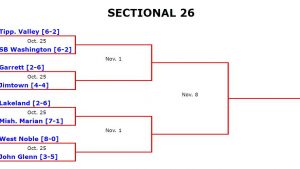