Jimtown has been blessed over the last 4 years with some athletic girls who love to play softball.   They have been playing softball for almost as long as they could walk.   They have been varsity contributors if not starters all 4 years in high school at Jimtown.   Last year, they both lead the Lady Jimmies to our first sectional championship in class 3A and the first one in several years.

Of course we are talking about, Jimtown’s very own, Gabby and Gianna Desimone.

Besides winning the sectional last year, the Lady Jimmies came very close to winning the regional—losing to Hanover Central by 1 measly run.  8-7.   Softball is of course a team game.  No 2 players can make a team win all by themselves.  Many other hard-working Jimtown girls did their part to make last year’s sectional championship possible.   It was the Desimone twins, however who decided with just a few games left in the season that the Jimmies had the talent and the will to get it done.  We had to stop worrying about things that have nothing to do with winning and losing and do whatever it takes to get the job done.  Gabby and Gianna had a HUGE hand in making that change of attitude possible on the field through leadership and leading by example.

This coming spring, the Lady Jimmies will try to make it two in a row and see if they can even make it higher and higher in the tournament.  We have a lot of talent coming back—including both Gabby and Gianna.

Deciding about college now and getting the weight of that decision off their backs will certainly go a long way to relaxing, having fun and winning a lot of softball games this spring in their last chance to represent the Jimmies. 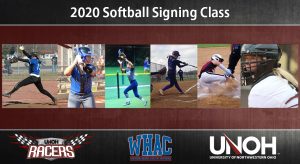 On November 16th, Gianna and Gabrielle Desimone signed their college recruitment letters of intent to attend the University of Northwest Ohio to continue their academic and athletic careers.   UNOH is located near Lima, Ohio.   The “Racers” compete in the NAIA and are part of the Wolverine-Hoosier Athletic Conference.

The signing ceremony for Gabby and Gianna  and the other 2020 signees for UNOH Softball was held at the halftime of a Racer’s Mens basketball game  on November 16th.

“We are thrilled with the signing of these outstanding student athletes,” said head coach Tracy Coffman.  “UNOH softball is continuing to attract top level athletes from the midwest region and it is a testament to the culture that has been established by our current and past players.  All of these signees are highly decorated prep athletes and their commitment to UNOH has been evident right from the beginning.  We talk a lot in our program about winning at everything, softball, school, campus life, etc and these six signees will fit right into this goal that our program has set for itself.”   Here are comments made by Coach Coffman at UNOH regarding the twins:

Gabrielle Desimone, an outfielder from Jimtown High School in Elkhart, Indiana, is a three-time letterwinner playing on a sectional championship squad in 2019 where she hit .333 with 15 stolen bases.  She is an honor student, actively involved in her high school with DECA, theatre and choir, and is a two sport varsity athlete, also playing volleyball.  The daughter of Brian and Dawn Desimone, Gabrielle is undecided on her major and has interest in interior design. “Gabby is an electric athlete, she is super speedy and has only begun to hit her potential,” said Coffman.  “We are excited to add such speed and athleticism to our outfield right away with the losses we will face this year to graduation.  She will add great depth to the left side of the plate in our offensive attack.”

Gianna Desimone, an outfielder from Jimtown High School in Elkhart, Indiana, is a multi-sport athlete earning varsity letters in softball, basketball and volleyball.  She hit .301 as a junior, helping her team to a regional appearance.  She is an honor roll student, involved in DECA and a member of FCA.  The daughter of Brian and Dawn Desimone, Gianna is undecided on her major. “Gianna is very fast and incredibly athletic and very excited to join our program,” said Coffman.  “She follows a long line of Racer greats who have been three-sport athletes in high school.  We are very excited to see her develop into a top outfielder and offensive threat in the WHAC.”

GREAT JOB GIANNA AND GABBY!!   We are very proud of you and your accomplishments at Jimtown.   It is exciting to see you chasing the dream and wanting to play softball at the next level!!