In all the sadness and heartache that we are feeling right now for our Jimtown Spring Sport Seniors  who are losing their last chance to compete as a high school athlete to the Covid-19 Virus,  it is more than appropriate that we pause to celebrate a success.    This announcement is more than a success, it is a “first-ever” celebration for not just Jimtown, but a college program that will be having their first-ever women’s wrestling program in 2020-2021.

Jimtown has had a few girls compete in wrestling over the years.  One or two, Here–there…sort of.     More trying to prove a point than actually being a legit, hard-core, in your face wrestler. 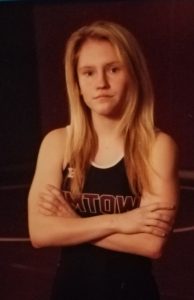 Then a few years, ago, along comes Riley Horvath.    Riley had never wrestled before she came to Jimtown as a sophomore.  She did, however have a background as a Rugby player.  A very GOOD Rugby player, which is of course, known for being a very physical sport.  Riley’s Rugby team were state champions in 2018.

Riley decided to come to the wrestling call out meeting when called by then first year head coach, Jerimiah Maggart.   Coach Maggart wrestled at Penn, which has had some very good female wrestlers over the years.  Coach Maggart was excited to have Riley.  He could see right away that she was not intimidated by wrestling boys in her own weight class.   “I could see right away that she was hard nosed and was ready to work to be good”.   “She does not back down for anybody”

Riley ended up finishing 6th in her junior year and 7th her senior year at the IHSWCA Indiana Girls Wrestling Tournament.   At this time the IHSAA does not recognize girls wrestling as a separate sport from boys wrestling.  Girls can wrestle in the IHSAA tournament, but they have to wrestle against the boys just like every other wrestler.   It is only a matter of time until the IHSAA has a separate tournament for girls wrestling.   The numbers keep going up each year and there is more and more interest.

The interest in women’s wrestling has been also increasing at the collegiate level.  There has been a women’s college wrestling tournament for many years at the college level, but it has been reserved for the very elite.   Smaller NAIA level colleges are now seeing the value in the high level of student engagement that comes from inclusion of womens wrestling at all levels of collegiate sports.

Enter the Warriors of Indiana Tech in Fort Wayne.   Indiana Tech has been a force—a titan–in men’s wrestling over the last several years in NIAA Wrestling.   Jimtown twins, Connor and Matt Gimson signed with Indiana Tech and have been doing very well there this year.

Indiana Tech is now adding women’s wrestling to it’s offerings for scholar athletes.   Riley Horvath of Jimtown will be one of the first recruits of a brand new program.    We would have loved to celebrate Riley and this accomplishment this spring with a signing ceremony at the high school, but of course events have prevented this.

You can read all about Indiana Tech’s new women’s wrestling program by clicking this link:

CONGRATULATIONS to Riley Horvath!!    We are very proud of you.   We look forward to reading your name in the paper as you continue your wrestling and academic career at Indiana Tech.   Keep working hard and think about your goals.   We have no doubt that it you do that, you will be successful in all that you do!!